Explanation of Market Trends and Forecasts

In 2017, the consumer (package + digital download contents) market picked up, increasing to 24.4 billion dollars (up 15.1% from the previous fiscal year). This was due primarily to an increase in digital download sales as a result of steady growth in the installation base of current generation game consoles and the arrival of the Nintendo Switch, despite packaged sales remaining flat. The consumer market is primarily comprised of North America, Europe and Japan, and this trend was especially evident in the North American and European markets, which account for approximately 85% of this market. The highly profitable digital download contents market now accounts for roughly 54% of the consumer market.

The forecast for 2018 is for the market to reach 27.6 billion dollars (up 13.1% from the previous fiscal year) owing to a continued virtuous cycle of increased software sales driven by the growing user base of current generation game consoles.

In the medium term, our user segment will grow as a result of the spread of consumer game consoles and development of new digital distribution methods such as cloud games. As such, we expect the market to grow to 35.6 billion dollars by 2022 (up 45.9% compared to 2017). 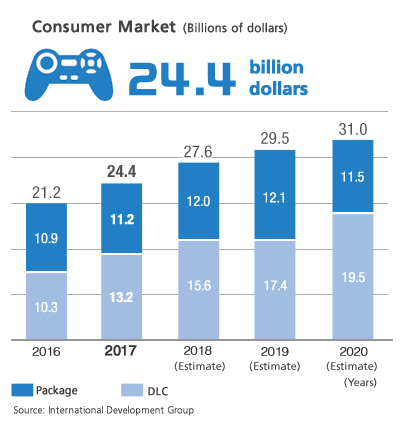 The freemium (virtual item purchases/ in-game purchases) model, where users download a game for free, then purchase access to additional items and other game content as needed, has predominated the market since about 2010. With freemium games, the key success factors are IP (brand/game content) coupled with operating know-how, which includes offering the appropriate services in conjunction with monetization. Because of this, the opportunity to improve earnings is growing for game companies with many popular titles as well as mobile development companies with operational expertise.

In 2017, the PC online market grew substantially to 38.4 billion dollars (up 23.9% from the previous year) owing to worldwide growth, especially in China and Asia, which account for more than 40% of the market.

The domestic arcade facilities market grew during the previous fiscal year (ended March 31, 2017) for the second year in a row to 462 billion yen (up 6.5% from the previous year). This was due to improvements in the number of visitors and sales per customer due to restrictions on the time that minors can be in arcades while accompanied by a guardian being relaxed in the Entertainment and Amusement Trades Act (Entertainment and Amusement Trades Rationalizing Act) and popularity of new models of video game consoles. The total number of arcades decreased to 14,154 (down 4.8% from the previous year), and the number of units installed at each arcade decreased to 31.4 (down 2.2 units from the previous year). However, annual sales per facility increased to 32.64 million yen (up 11.8% from the previous year), demonstrating that the management streamlining many companies have engaged in, closing unprofitable locations and focusing on profitable stores in good locations, has been successful.

This year (ended March 31, 2018), the market was strong overall, and growth continued owing to hit products appearing one after another in the prizes found in prize game machines.

In the next fiscal year (ending March 31, 2019), we expect the market to remain flat due to prizes that were hits this year losing steam, despite the introduction of networked card-based games and video games featuring popular characters. 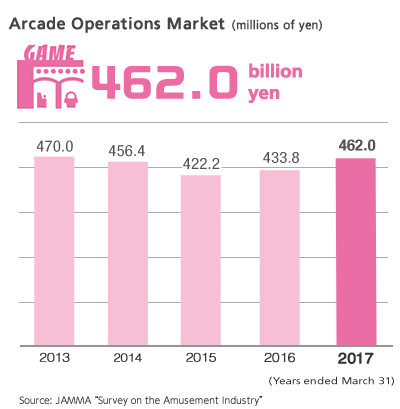 In the previous fiscal year (ended March 31, 2017), the gaming machine market shrank for the fourth consecutive year to 882.1 billion yen (down 10.2% from the previous year). This was due to both pachinko and pachislo machines being hit hard by diminishing investment appetite for gaming machines among halls due to worsening financial results and a decrease in the number of new stores opened.

The market continued to worsen this year (ended March 31, 2018) due to changes to gaming machine regulations in February 2018.

In the next fiscal year (ending March 31, 2019), we expect the shrinking of the market to come to an end as the number of users recovers with the gradual introduction of models with improved product value beginning in the second half. This is in conjunction with the enforcement of new self-imposed restraints in April 2019 despite the changes to the gaming machine regulations. 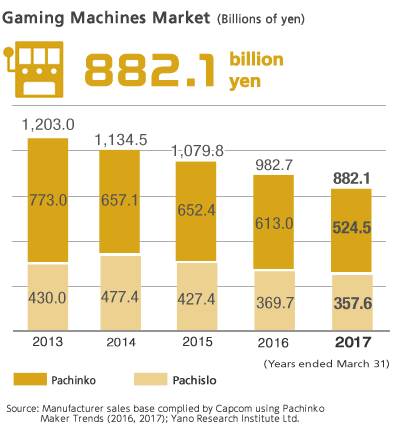 In the previous fiscal year (ended March 31, 2017), the arcade game market grew to 149 billion yen (up 2.0% from the previous year) thanks to hit crane and networked card-based games , despite a decrease in the number of amusement vendors.

This year (ended March 31, 2018), sales of new crane games and prizes continued to grow and are slowly on the rise.

In the next fiscal year (ending March 31, 2019), we expect the market to perform well in conjunction with increased investment appetite among facility operators and the launch of multiple popular models.