Environmental Action as an Entertainment Company

Capcom’s Digital Contents business accounts for approximately 80% of the Group’s consolidated net sales and primarily entails the development and sale of software. This gives Capcom an environmental impact that is lower than the general manufacturing industry. Because our environmental impact comes largely from the power used at amusement facilities and for manufacturing pachislo machines, as well as from distributing our products, we are focused on saving energy. 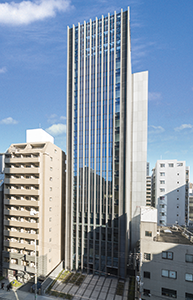 Promoted energy-saving initiatives,
including switching to LED lighting at
each workplace

Capcom has worked to cut power usage through efforts that include ongoing power saving at all of its places of business, saving energy at its amusement facilities, and implementing peak shifting for the power used by PCs and other electrical equipment. The fiscal year ended March 2017 saw our CO2 emissions increase compared to the previous fiscal year due to the construction of the R&D Building #2 and Capcom Technical Center. However, in the fiscal year ended March 2021, we succeeded in reducing emissions by 9.5% compared to the previous year by introducing energy-saving equipment at those facilities and promoting the switch to LED lighting at each workplace.

* Assumes energy consumption of 100% without introduction of this equipment. 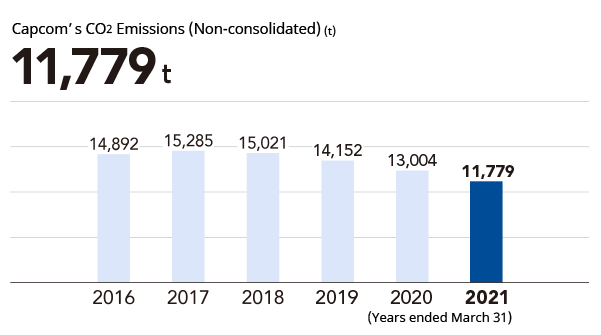 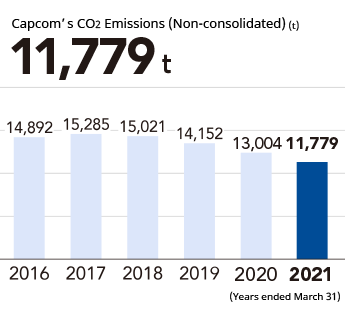 Every year Capcom has achieved year-on-year reductions to its energy intensity. For these efforts, Capcom has been awarded S Class (out of classes S, A, B, and C) status for five years running under the Business Operator Class-Based Assessment System that has been administered since 2016 by the Agency for Natural Resources and Energy in accordance with the Act on Rationalizing Energy Use (Measures Pertaining to Factories).

In the past, games included a printed instruction manual inside the package, but in recent years, these manuals are now included as data within the software as a way to save paper. This enables us to eliminate approximately 30.10 million game units’ worth of paper manuals annually.

Moreover, the increasing popularity of digital sales, where games are downloaded after purchase, has made it possible to conserve resources used to produce discs, semiconductors, software packaging, and other components in addition to paper resources.

In the fiscal year ended March 2021, the resources used in the equivalent of around 23.15 million units of game software were conserved as a result of digital sales. We will continue promoting digital sales of game software with the aim of achieving effectively zero resource consumption in the future by selling solely via digital download.

Sharing distribution networks with other companies in the industry

Sharing distribution networks with other companies in the same industry when shipping products enables the efficient supply of products. As a result, we are able to realize reductions in packing materials, fuel and emissions. In the future, we aim to achieve further reductions by decreasing the volume of distribution through the promotion of digital sales.

In solidarity with the efforts of the Japan Pachislo Machine Industry Association (Nichidenkyo), Capcom manufactures and sells pachislo machines partially made from recycled parts and equipped with standardized “green devices” aimed at controlling power usage.

※2 Capcom switched to new cabinets in fiscal 2019, so there was no collection of used arcade game machines.

At Capcom, we encourage employees to live within five kilometers of their place of work and to commute by bicycle. As such, we have arranged company housing near our offices and built bicycle parking close to our R&D facilities. The primary goal is to promote a proper work-life balance by shortening commuting distances, but at the same time, it also helps reduce greenhouse gas emissions associated with use of transportation. 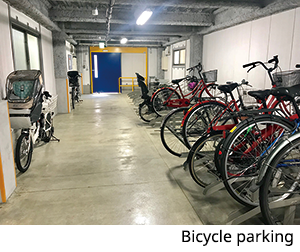 In October 2020, the Japanese government pledged to be carbon neutral by 2050. The goal is to realize a carbon-free society by 2050 and effectively eliminate greenhouse gas emissions.