1983, Capcom Co., Ltd., was established in Osaka. The Nintendo Entertainment System (NES) came out that same year, but it was difficult to develop high-quality arcade-level content for, so Capcom focused business development on the creation and sales of arcade games using the proprietary high-spec circuit board "CP System."

Released Mega Man for the NES. 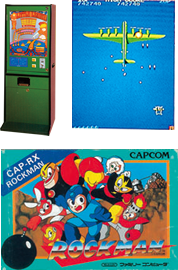 In the 1990s, the arrival of Super NES prompted Capcom to formally enter home video game development. Numerous hit titles were created that drew on Capcom’s arcade game development expertise. The Single Content Multiple Usage strategy was launched in earnest in 1994 with the release of a Hollywood movie and animated movie based on Street Fighter.

Released Breath of Fire for the Super NES.

Released Resident Evil for PlayStation, a long-time seller which had record breaking sales, and established the genre of survival horror. 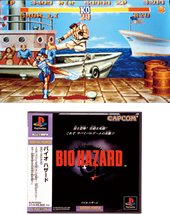 In 2000, Capcom listed its shares on the First Section of the Tokyo Stock Exchange. In the 2000s, Capcom created one hit title after another that gained popularity overseas. The Hollywood movie version of Resident Evil earned 102 million dollars globally, part of a six title hit series that continues to spread the Capcom brand throughout the world.

Released Devil May Cry for PlayStation 2.

Released Dead Rising for Xbox 360. Became a million-seller, unprecedented for a new title created for a new game console.

The smartphone and tablet game app market is growing rapidly.
Capcom has released titles featuring our intellectual properties in this market. We are also staying ahead of technological advances by developing games for dedicated consoles that make use of virtual reality.

Released the home video game Dragon’s Dogma.
It sold over one million units, uncommon in recent years for a new brand.