Capcom views esports as the future of sports, where anyone can compete regardless of age, gender or physical differences, and is working to ensure esports’ long-term future by firmly establishing its place in society as a new form of entertainment. As a first step, Capcom will focus on expanding opportunities for professional athletes to shine while working to discover beginner and amateur athletes, all with the aim of developing the domestic esports market and growing the number of participants.

The three competitions announced will work as part of Capcom’s efforts to build a gateway for beginner and amateur athletes to work their way into professional leagues. The Arcade League will be held at amusement centers throughout Japan, while the College League will be for students, with both leagues featuring tournament play via 3-on-3 team battles. Additionally, both the winning teams of each tournament and the top-ranked players of the Rookie’s Caravan 2019 will advance to Street Fighter League: Tryout. There, they will be eligible to be drafted by team leaders from the SFL: Pro-JP, with the possibility of winning a spot on a pro team.

*The details concerning events contained in this release are subject to change without notice. 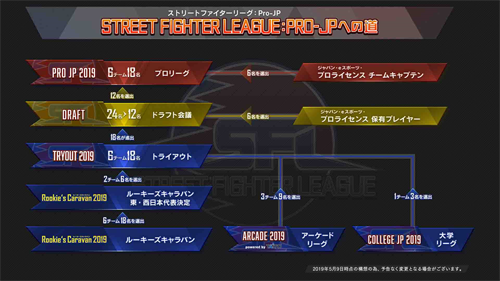