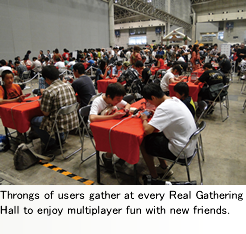 Finally, “Monster Hunter” became Capcom’s hallmark title, but it’s not only because the game is fun that it became such a hit. Regardless of how fun developers make a game, if that fun is not communicated to users, no one will buy the game. Promotions such as events to attract new users and collaborations with other industries also played a major role.

As multiplayer experience is the game’s selling point, we held “Monster Hunter Festival”, an event providing users with an environment to facilitate this feature. The event featured a “Real Gathering Hall”, where users who had never met before enjoyed multiplayer gaming. Both users who want to play with many people, as well as solo players who never tried multiplayer games before enjoyed the event, and this has become a popular sell-out booth at these events. 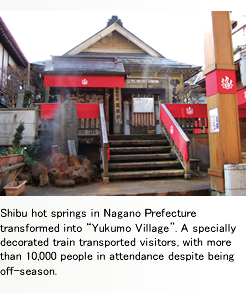 Another effect of holding these events is that they raise awareness among non-game users. Die-hard users will be playing games all the way to and from the event venue. Other people see them and wonder what it is they are playing, which can influence their interest in games.

Capcom proactively engages in collaborations with other industries, including “Monster Hunter” T-shirts with UNIQLO CO., LTD., the development of a GariGariKun popsicle package illustration for AKAGI NYUGYO Co., Ltd., and events at Universal Studios Japan, in an attempt to raise visibility among light users. Around the launch of “Monster Hunter Freedom 3”, with the understanding and support of the local merchants association, we created a buzz when we used the hot spring resort town of Shibu in Nagano Prefecture as the setting for a promotional event that transformed the area into “Yukumo Village”, where the game takes place, complete with structures and street facades from the game.

Introducing games to new users are none other than existing users. Collaborations and events following our dual development of creating a sense of anticipation that makes users want to introduce it to friends, as well as raising awareness so those being introduced have already heard of “Monster Hunter”, is behind our success at expanding the user segment.

Attempting the Unprecedented:
Behind the Scenes at the Shibu Hot Springs Collaboration

At first there were many people at Shibu hot springs who were unfamiliar with the game’s content, and there were concerns about damage to traditions or customs as a result of the collaboration. We overcame these barriers not by exposing them to the game, but rather by an experience of various events that led a deeper understanding of the game. The project itself, turning a hot springs resort into a fantasy village, was presented as a win-win proposition, creating a bond of trust with the locals. The result of this approach was we were able to hold an event that even first-timers enjoyed with “Monster Hunter” as the common language, an extremely significant achievement, I think.

Linking attention-grabbing games with the maximization of sales, the sales department provides “Monster Hunter” information to the world throughout the year to create an environment where sharing games with friends is as easy as possible. 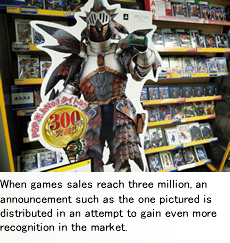 In addition to events, such as the aforementioned “Monster Hunter Festival” and test play events, we announce game sales milestone achievements and emphasize how popular our games are around the world in an attempt to perpetuate popularity. We also work with retailers to secure long-term shelf space and set up the “Monster Hunter Support Shop”, and we distribute “MONFAN” newsletter in an effort to provide continuous information.

With “Monster Hunter”, we were creative with the timing of releases. Lower-priced versions are usually released around the time sales begin to flatten, but with “Monster Hunter” it was sooner, being released about six months after sales launch, providing incentive for users who otherwise would have had to buy a whole new game device or were hesitant about purchasing because of the price. Considering this is a game where users invite each other to play, rather than waiting until after sales peak, more games will be purchased if we sell while the game is still hot around the world, or else the effort is meaningless. This policy resulted in “Monster Hunter Freedom Unite PSP the Best” becoming an unprecedented million-selling lower-priced title.

The release date is also important for creating a buzz. Most “Monster Hunter” users are middle and high school students. We interject promotions and release date decisions with measures reflecting target user lifestyle, which students tell each other about at school.

The result of these initiatives was, in the past, when we started taking sales reservations at some retailers, reservations for four games at a time suddenly increased. This was proof that the market recognized that “Monster Hunter” is a game played together by four people.

We made an effort to see how much understanding we could facilitate with the first “Monster Hunter”. With completely new titles, it is hard to understand the game just by playing it a little. Dispatching knowledgeable staff to explain game content at events so users can enjoy test playing new games, we were able to respond to user uncertainties and opinions. We continue to consistently employ this method in an effort to provide a precise follow-up to anyone experiencing “Monster Hunter” for the first time.

Already at Top Speed, “Monster Hunter” Evolves Along with Users 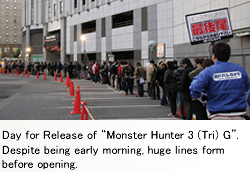 In December 2011, “Monster Hunter 3 (Tri) G” for the Nintendo 3DS was released. It was a title that brought many rewards, including favorable sales of 1.6 million units despite the challenge of a completely new device as well as knowledge for future title developments. In the spring of 2013 we will release new title “Monster Hunter 4”, which is jam-packed with all kinds of new elements. 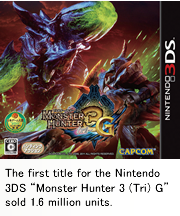 Developing this new “Monster Hunter” title, we upgraded and created various elements not present in the series up to now, including a time attack element where players see how quickly they can take down monsters, as well as “Felyne Comrades” who help players take on monsters. Rooted in the idea of a game that anyone can enjoy, all these elements were devised for a wide user segment, from core to light users. The basic concept established in the beginning continues unabated.

For the eight years since the series debut in 2004, “Monster Hunter” staff always wants to do what has never been done before. This is all so that users will enjoy our games. We have gotten this far because of the existence of understanding users. Going forward, we will continue to evolve the “Monster Hunter” with users as Capcom’s representative title. 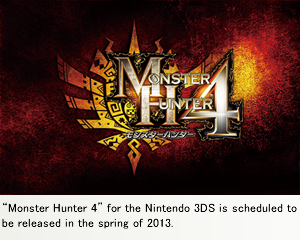 “Monster Hunter 4” is being developed to include all the fun we have come to expect from the series yet with a feeling of newness. We aim to create a long-lived series that kids playing the game today will want to enjoy with their own kids someday. I would be happy if this evolution makes people think “Monster Hunter 4” is why the series kept going.