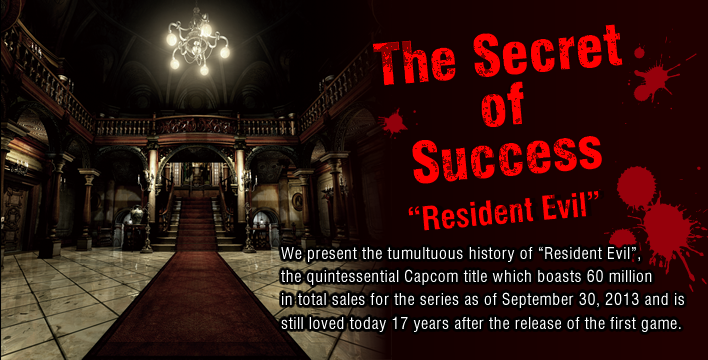 It is 17 years since the advent of “Resident Evil”, and the title has evolved in various directions, including Hollywood movies, amusement park attractions and restaurants, and boasts recognition even among non-gamers. However, the original “Resident Evil” was just a pilot developed for the PlayStation, the new hardware platform of the day. Nor were there any great expectations for “Resident Evil” within Capcom when its development started because of the existence of “Street Fighter”,* which boasted absolute popularity. 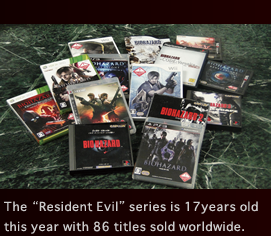 While many veteran creators were brought together for “Street Fighter”, which was highly anticipated within and outside the company, only young creators were assembled for the unproven “Resident Evil”. They included many novices creating their first game. Therefore, despite some feelings among employees assigned to “Resident Evil” that it was a kind of demotion, the novice creators were not worried about that kind of environment and created the games literally from one. Because the hardware was new, they suffered from a shortage of development tools, and “Resident Evil” was developed through repeated trial and error, which sometimes included disagreements and clashes of opinions within the team.

* The landmark combat-based fighting game that came out on arcade machines in 1987,
creating a boom mainly among the young.

My first assignment on joining Capcom was the “Resident Evil” development team. As a programmer, I was responsible for system peripherals, including engine creation. At the time, it was unprecedented as the first 3D game development at the company, so there were a lot of conversations which went something like, “Let’s actually create programs and try comparing them” because we couldn’t make any predictions about what would happen if we did a certain thing as there were no past results. At the time, I was new so I didn’t have experience or know-how. On the other hand, I can say that I was able to develop things without any preconceptions.

“Resident Evil” went on sale in March 1996. It could not be said that expectations for the game were high by any standard. However, typified by expressionless zombie that turns his head towards the player and zombie dogs appearing as they broke through windows, the horrors which were packed into the game gradually fascinated gamers.

Incidentally, even though “Resident Evil” is a Japanese-made game, the characters speak English, and the Japanese is shown in subtitles like it is at the movies. This Hollywood movie atmosphere also produces a sense of tension as a horror game. We did actually record Japanese voices as well, but they were shelved because they did not fit with the “horror set in a Western-style building”.

It was a time when the Internet and mobile phones were not as widespread as they are now, and the attention to this kind of detail spread by word of mouth. As a result, sales rose gradually from 200,000 – 300,000 units immediately after the launch to reach 1 million units in a year.

Based on this success, it was decided to produce the “Resident Evil 2” sequel. Although it was initially scheduled for release in 1997, we couldn’t produce a game that was of the expected quality, perhaps because of pressure from the success of its predecessor, and took the big decision during development to reset everything and re-make it from the beginning. Therefore, the release was delayed by a year to 1998, and features such as the increase in the number of zombies displayed on screen compared with its predecessor and the zapping system in which the actions taken by the players affect the storyline aroused interest, making it a major hit which has sold 4.96 million units* up to the present.

Avant-guard experiments such as increased action elements and the appearance of new foes to pursue players also paid off in “Resident Evil 3: Nemesis”, produced based on the success of “2”, which has cumulative sales of 3.5 million units*. The first three successive titles all achieved million-unit sales.

“Resident Evil” was being developed in my fourth year at Capcom, and I was made leader of graphics. As it was the first “Resident Evil” game, we felt our way, but we put in what we wanted to because of that. The fact that a “shell makes a noise when it flies out of a gun and it falls to the ground” is obvious in reality, but the attention “Resident Evil” paid to this kind of detail meant it was credited with being “a next-generation game”. 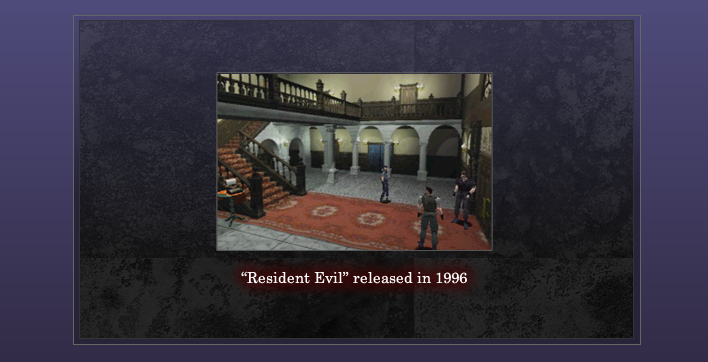 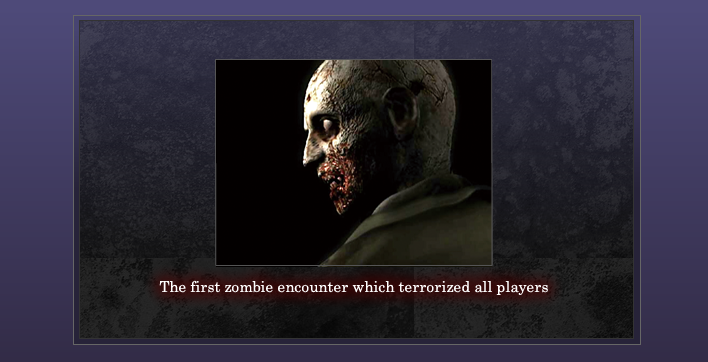 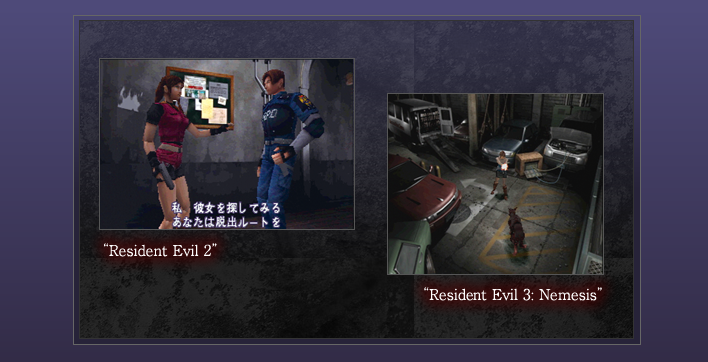 “Resident Evil” appeared to have consolidated its brand value by achieving consecutive million-unit sellers up to the third game. However, ten years had passed since the series was created, and a downward trend was being observed in sales. The development team decided on a full model change for “Resident Evil 4”, believing that “if the trend continued that way the brand would disappear”.

What did change significantly as a result of trial and error was the perspective. The “behind view” looking ahead from behind the character was changed from the previous top-down view. Additionally, a “shooter element”, which is popular overseas and allows players to aim at and shoot the weak spots and specific areas of their opponents, was incorporated.

As a result of matching these big changes superbly with the horror elements of “Resident Evil”, “4” is credited with being the standout success of the series. This is demonstrated by the fact that although it was originally only released on GameCube, it was subsequently released for PlayStation 2 and Wii as well as iPhone, iPad and other devices and is now the title in the “Resident Evil” series which has been developed for the most hardware platforms.

The elements that gained popularity in “4” were inherited by its sequel “Resident Evil 5”. Breaking away from its previous dimly lit image with a concept of light and shadow opening out under the sun, it achieved sales of 6.5 million units*, an all-time high for the series.

I was involved in “Resident Evil 4” as producer. In fact, prior the development of “4”, I had developed the remake of “1” for GameCube, and I had confidence in my development know-how. But the goal in terms of pursuing the “Resident Evil” identity through a full model change of the popular series was completely invisible. The team constantly felt anxious over things like hearing the reaction of the press every time we made an announcement. However, in the end, receiving high evaluations from all the media gave us confidence in subsequent development. 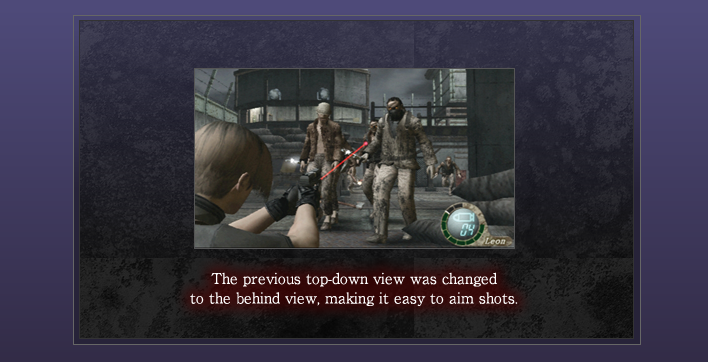 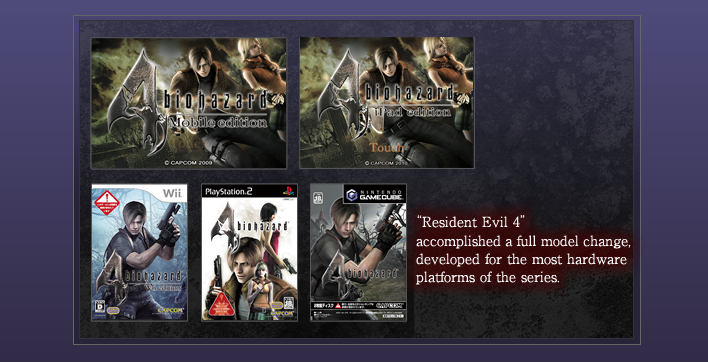 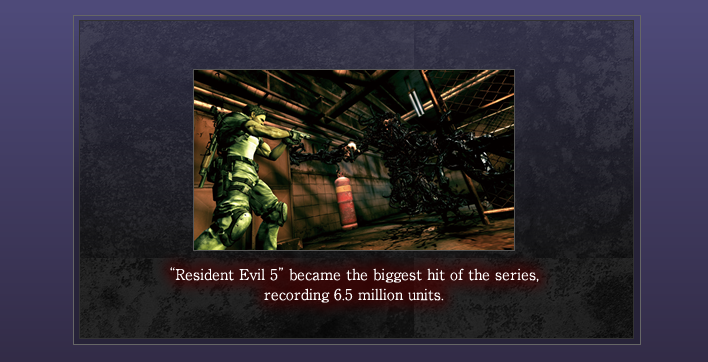