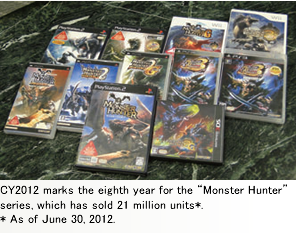 “Mega Man”, “Street Fighter”, “Resident Evil” and “Devil May Cry” are all franchise titles representing Capcom. Possessing a multitude of powerful contents, Capcom establishes new franchises from the creation of new brands as its basic strategy, and will regularly release newly completed titles into the market.

The first title of new brand “Monster Hunter” was released in March 2004. At that time, the network environment was just beginning to be upgraded, and Capcom was on the lookout for entertainment using this telecommunications environment, with several home video game titles supporting online play under development. Among these, based on the concept of an action game anyone can enjoy and play collaboratively with multiple players while communicating with other users through the network, the title most focused on the next generation was the “Monster Hunter” project.

Capcom’s First Challenge: An Action Game that Anyone Can Enjoy and Play Collaboratively with Multiple Players

Up to then, Capcom has primarily created fighting games, so the creation of a collaborative game was a new experience. However, I also remember it being somewhat daunting to create an original title from scratch.
Compared to offline games, network games have quite a few restrictions, so the selection of elements is critical. We decided that only large monsters would be synchronized in “Monster Hunter”, prioritizing accurate player manipulation of characters in an aim to create an action game that anyone can play comfortably.

Fun Collaboration with Friends in Online Action with Mass Appeal

Online games played with total strangers are likely to create pressure to hinder or help their progress, which causes hesitation among some people.
“Monster Hunter” alleviates this pressure by aiming for mass appeal from the very first title, a game that anyone can enjoy.

One example of this is a system whereby rewards are earned by subduing monsters. “Monster Hunter” is an action game in which monsters are hunted and stripped of their items, and items and money rewards are acquired after a level is cleared, but just being active in the game does not necessarily mean rewards can be acquired. Suppose that specs were set to change rewards into damage proportional to monster.This would result in players fighting each other and transforming the game into a bloodthirsty battle. To avoid this, conditions under which rewards are acquired are equal for players lethally damaged by monsters as well as players with no damage at all. If one is confident with their chances against a monster, they can battle away to their heart’s content. If not, they can relax in the safety zone. With a wide variety of permissible actions, this is one online game that anyone can participate in comfortably.

“Monster Hunter” was created with these kinds of particulars, but it was not an explosive hit right from start. In addition to complicated manipulation using all the buttons on the controller, the networking potential of home video game consoles was still undeveloped. Compared to today, the equipment and network settings were extremely labor intensive, so the game did not immediately take off among players used to offline games and only garnered the support of a few core users.

However, less than a year after the release of “Monster Hunter” the second title in the series “Monster Hunter G” went on sale.The heat generated in the market never cooled and continued as word of mouth among fans steadily increased its popularity.

Regarding monsters, not only do players charge ahead recklessly, they also anticipate attacks while waiting during breaks after monster attacks. “Monster Hunter” was created with this kind of tactical action in mind. Tactical assessment of the monster’s actions is one way we made use of our experience creating fighting games. In the beginning, we created a system to inculcate the importance of tactics, including a “teaching” monster so users could understand how to get around in the game. We were careful to ensure players would naturally become familiar with the game.

As the number of “Monster Hunter” players gradually began to expand, market monitoring revealed that, since players wanted to play with many different people, a lot of users were telling others about “Monster Hunter”.

Given this information, we started a project with the idea of making introduction of the game to others as easy as possible, and so created “Monster Hunter Freedom” for handheld devices. Portable devices facilitate a simple product presentation: users can introduce the game to others anyplace, any time, and the friend can try the game out immediately.

We also make an effort to distribute ongoing downloadable content. Regardless of the effort we put into the production of a game, once the fad is over, no one will introduce the game. We regularly distribute new event quests and other downloadable content so that users can continue to enjoy games anew even after their launch.

The New Charm of “Monster Hunter” for Portable Devices

Producing content for portable devices, we focus on maximizing convenience while walking around. To enable play for short periods of time while moving from one place to another, we added new “farm-like” elements such as mini games where users catch insects and fish. We also lengthened running time so that finding items in quests is more comfortable, making adjustments differently compared to home video consoles. Also, rather than multiple button issues, we had to come up with a whole new way of controlling the game. Creating something new while preserving past elements was extremely hard work, but after much trial and error, we were able to establish a definitive control method, one that continues to be used today.