In 2017, the Street Fighter Series celebrates its 30th anniversary.
It’s the series that defined the fighting game genre while giving rise to numerous social trends.
After 30 years, Street Fighter continues to provide users with fun, competitive fighting and is one of Capcom’s flagship IPs.

Street Fighter was launched as an arcade game in 1987, but it was the Street Fighter II arcade game, released in 1991, that established this series’ popularity in Japan with the catchphrase “I’m looking for someone stronger than me.” Street Fighter II defined the fighting game genre, allowing players to square off against each other by controlling characters that deliver punches, kicks and special moves. The game ignited a fighting game craze, and went on to record sales of 6.3 million units worldwide. Known affectionately as “SF II,” this title sparked a major movement in gaming.

As with sports such as baseball and football, Street Fighter demands that you sharpen your skills with practice and grow stronger; that you change tactics depending on the actions of your opponent. This game has captured the hearts of fans with its amazing special moves performed by a cast of unique characters, and its element of head-to-head combat where you try to defeat warriors stronger than yourself. As a result, the series has sold a cumulative total of 39 million units across 84 titles over its life. In commemoration of the 30th anniversary of Street Fighter in 2017, we released Ultra Street Fighter II: The Final Challengers and have a number of events planned. 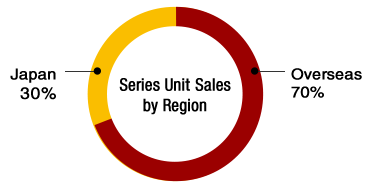 It is not easy to maintain popularity over a 30-year period. Capcom has carried out a variety of strategies in response to the changing gaming environment and market needs. For example, strategically releasing titles to continuously capture new users; now that kids who enjoyed the game growing up have become adults with children of their own, we release titles that parents and children can play together, and engage in collaborations with popular titles from other companies as well. We foresaw the coming era of internet-connected games early on, and advanced production of games with network features while building online communities.
Further, in line with our Single Content Multiple Usage strategy, we delighted fans with comics, animation, live-action movies, books and merchandise.

A number of animated and Hollywood movies have been made featuring Street Fighter‘s distinctive characters. The Japanese song Itoshisa to Setsunasa to Kokorozuyosa to was featured in the 1994 Street Fighter II animated movie, and will be used as the Japanese theme song for the 30th anniversary.

Even with these strategies, it goes without saying that our unique and interesting characters are the basis for the popularity of the series. The hadouken thrown by Ryu is well known even among people unfamiliar with the game, due to the popularity of the “hadoukening” photo fad from 2013, where people posted pictures of themselves being blown back by this fireball on social media.

At present, Street Fighter is gaining popularity as a key title at eSports game competitions, especially overseas. While keeping pace with the times, we will aim to be at the pinnacle of fighting games. 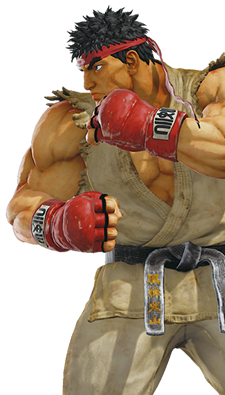 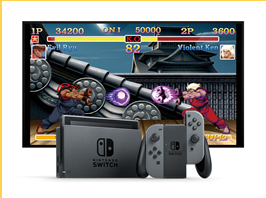 Nintendo Switch is a registered trademark of Nintendo.

Now on the new Nintendo Switch™

Our latest title in the series, Ultra Street Fighter II: The Final Challengers, includes new elements added to the legendary SF II and is available for the Nintendo Switch™. The design enables users to switch between classic and contemporary graphics, providing fun with a sense of nostalgia as well as fresh surprises. 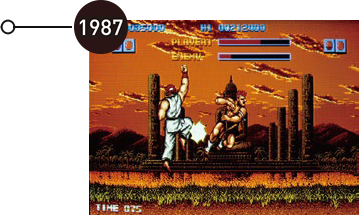 The first title and cornerstone of the Street Fighter Series. 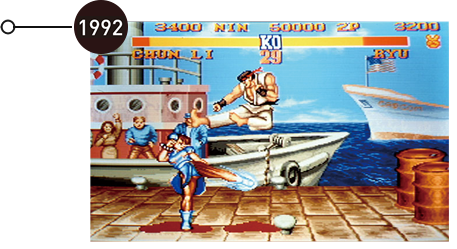 Boasting cumulative global sales of 6.3 million units, it set the record for the best-selling fighting game at the time. A megahit that launched the fighting game craze as a social phenomenon. 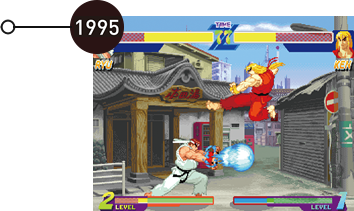 Switched to graphics based on animated cells rather than dot patterns, enabling more animation patterns. 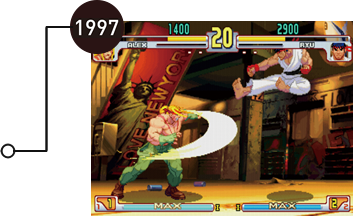 The next numbered title in the series following Street Fighter II. In addition to a major revamp to the roster, Alex inherited the role of main character from Ryu.

The third best-selling title in the series gained popularity thanks in part to its advanced 3D graphics.

Featured gameplay that enabled both experienced players and newcomers alike to play together; based around a development concept of “reboot.”