Capcom Co., Ltd. (Capcom) has previously issued statements from November 4, 2020 through January 12, 2021 (“previous announcements,” below) announcing that it has been the victim of an attack due to unauthorized access to its network by a third party and that some personal information maintained by the Capcom Group has been compromised (“the incident,” below).

The investigation into the incident, carried out with the cooperation of external specialist companies, has been completed and Capcom has received their findings. As such, Capcom can now make an announcement regarding the findings of that investigation as well as the measures it will take to prevent future incidents. At this point in time, the Capcom Group’s internal systems are near to completely restored, and while coordinating with the newly established Information Technology Security Oversight Committee, the company will work toward continuously strengthening both security and the protection of personal information going forward.

Capcom offers its sincerest apologies for any complications and concerns its customers as well as its many stakeholders may have experienced, and further, would like to express its deepest gratitude for their ongoing support during this time.

2. Root Cause and Scope

Capcom worked with multiple companies including major security vendors and IT specialist companies to carry out an investigation into the devices and transmission logs affected in the attack. As a result of carrying out this investigation, Capcom has found that the incident occurred as described in the following summary. Further, as stated in previous announcements, the Company has been coordinating both domestically and overseas with law enforcement and related organizations, while also continually reporting and corresponding on a timely basis with the authorities that oversee the protection of personal information in each country.

The IT specialists determined that following this, some devices were compromised at both the Company’s U.S. and Japanese offices through the affected old VPN device at the Company’s North American subsidiary, leading to the theft of information. While the Company had existing perimeter*1 security measures in place and, as explained below, was in the processes of adopting defensive measures such as a SOC*2 service and EDR*3, the Company had been forced to prioritize infrastructure improvements necessitated by the spread of COVID-19. As a result, the use of these measures was still in the process of being verified (not yet implemented) at the time this matter took place.

Following the final stage of the attack, some devices at both the Company’s U.S. and Japanese offices were infected with ransomware on November 1, 2020 beginning at approximately 11 PM (JST), resulting in the files on affected devices being encrypted. Beginning in the early morning hours of November 2, 2020 some of the Capcom Group networks experienced issues that affected access to certain systems, including email and file servers. While the Company halted certain operations, it worked to quickly restore them. The above is a broad explanation of the incident from the external specialist companies, who have provided Capcom with the conclusion that the incident was a malicious, multi-faceted attack that would be difficult to defend against.

*2: Acronym standing for Security Operation Center. A SOC service is a system that monitors systems and networks around the clock, and supports the detection, analysis and handling of attacks.

*3: Acronym standing for Endpoint Detection and Response. A system that introduces software to detect unusual activity on devices such as the PCs and servers utilized by end-users and supports quick responses to issues. 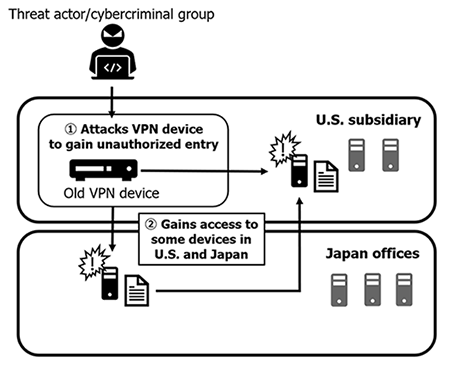 In addition to the Company’s existing perimeter security measures, following the incident, Capcom has taken a variety of measures to strengthen existing security with the aim of preventing any reoccurrence. This includes the introduction of an SOC service, which continuously monitors external connections, and EDR, which allows for early detection of unusual activity on devices. Below are explanations of both the measures Capcom has taken to address the incident and those it plans to carry out, as of the time of this announcement.

While Capcom has been informed by external specialist companies and the Information Technology Security Oversight Committee that items a.~f. above are in line with current best practices, it is possible that new threats and methods of attack could be created. Going forward, Capcom will continue to take various measures to address any such future developments with direction from the Information Technology Security Oversight Committee.

ii. Potentially compromised data
There have been no changes following the January 12, 2021 announcement.

As described in previous announcements, none of the at-risk data contains credit card information. All online transactions etc. are handled by a third-party service provider on a separate system (not involved in this attack), and as such Capcom does not maintain any such information internally.

Further, regarding the total number of people whose data was potentially compromised, because a portion cannot specifically be ascertained due to issues including logs having been lost as a result of the attack, Capcom has included the maximum number of individuals whose data was maintained on all potentially compromised servers. Additionally, the company has not been able to confirm any damages, etc. resulting from actual misuse of the compromised information at this point in time. (For information regarding ransom demands made to the company, see “6. Regarding Capcom’s Awareness of Ransom Demands,” below.)

i. Capcom is notifying those whose personal information or corporate information has been confirmed to have been compromised to discuss the background of this incident and current situation.

ii.For individuals who wish to inquire about compromised personal information, as has been described in previous announcements, please contact the following support desks in your country or region:

6. Regarding Capcom’s Awareness of Ransom Demands

While it is true that the threat actor behind this attack left a message file on the devices that were infected with ransomware containing instructions to contact the threat actor to negotiate, there was no mention of a ransom amount in this file. As explained in previous announcements, Capcom consulted with law enforcement and determined to not engage the threat actor in negotiations; the Company in fact took no steps to make contact (see the company’s November 16, 2020 announcement), and as such Capcom is not aware of any ransom demand amounts.

While there have been no changes to the most recent forecast for the Capcom Group’s consolidated business results (for the fiscal year ended March 31, 2021), the company will swiftly make an announcement in the case that any further disclosure is necessary.

Capcom would once again like to reiterate its deepest apologies for any complications or concerns caused by the incident. As a company that handles digital content, it is treating this incident with the utmost seriousness, and will take the appropriate action to address any requests or directions provided by law enforcement and other relevant authorities in each country. At the same time, Capcom will endeavor to further strengthen its management structure while coordinating with the relevant organizations to pursue its legal options regarding criminal acts.