Capcom Co., Ltd. (Capcom) today announced that the decision has been made to produce an animated TV program based on "Monster Hunter Stories" (as announced in Japan), the first role playing game (RPG) in the "Monster Hunter" series which is currently under development. Programs are to be broadcast by Fuji Television Network, Inc. in 2016.

The "Monster Hunter" game series are action RPGs that pit players against giant monsters in a beautiful natural environment. The series has sparked a social phenomenon known as the "Monster Hunter Craze" by introducing a new kind of communication style for players through cooperative play focused on hunting monsters with their friends. The number of fans continues to steadily increase even 11 years after the 2004 debut of the first "Monster Hunter" title. The series has grown into a mega-hit with global cumulative sales exceeding 32 million units as of June 30, 2015.

Capcom plans to launch "Monster Hunter Stories" in 2016 for the Nintendo 3DS system. While incorporating the same worldview as other titles in the game series, the new title will feature a new main character called "Monster Rider" who forms bonds with monsters and lives with them. In addition, players will be able to choose a young boy or girl as the main character. Capcom is now working on these and other features that will make the "Monster Hunter" series appealing to an even broader range of age segments.

The animated TV program, tentatively called "Monster Hunter Stories", is scheduled to debut in 2016 on the Fuji Television Network and other broadcasting networks. This will be the first animated version of "Monster Hunter". Together with Fuji Television Network, a company that has produced numerous family themed animated programs and programs featured from comic books for the young that have become very popular in Japan, Capcom plans to use the "Monster Hunter" series to create a new animated adventure and entertainment program that people of all ages can enjoy.

Capcom is determined to continue creating games that are highly entertaining. Furthermore, in accordance with the Single Content Multiple Usage strategy, Capcom plans to make extensive use of its content in other media in a manner that matches the characteristics of each game or fits well with the targeted user segments. By using this approach, Capcom is dedicated to maximizing the value of its content while playing a role in the growth and progress of the entire market for entertainment content.

*Nintendo 3DS is a trademark of Nintendo Co., Ltd. 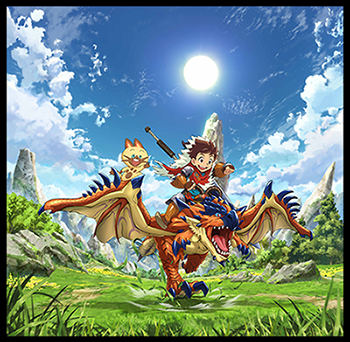