Before we talk about Monster Hunter World: Iceborne, we’d like to ask about the base game, Monster Hunter: World, which we heard had the “World” subtitle added to appeal to a global audience. After the title became a big success, were you and the team able to take a breather?
We were developing Iceborne in parallel after the release of World, so there was no real sense of “finally, we’re finished!” Even now we’re continuing to promote World, so it’s still too early for a breather. Having said that, we’d always felt that selling 5 million copies was our first major goal, so we’re very happy that we were able to clear that hurdle by such a wide margin. There are still players out there who have yet to be introduced to World, and as a producer I want to push its numbers even higher. 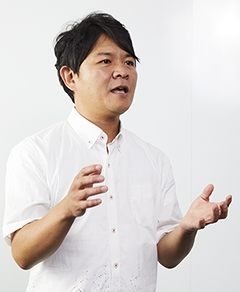 Before World’s release, Monster Hunter had the reputation of being a very popular title that was focused on the domestic Japanese market. What caused World to be so well-received internationally?
As a rule, I believe that what makes something fun can be understood by anyone, no matter where you live. I think the same goes for games. With the release of World, we didn’t stray far from the original concept of the series. What we did was listen to feedback from international players, run focus tests, and take measures to ensure a global simultaneous release. Another big factor was going further than just the fictional “Monster Hunter Language” and implementing languages like Japanese and English for the characters’ voices.
Adding damage numbers when attacking monsters was also a big shift.
In the focus tests I mentioned earlier, we received feedback that even though Monster Hunter is an action game, it was hard to understand which attacks were effective. We discovered that there was a segment of players who couldn’t figure out if they were attacking correctly or not. We floated the idea of displaying the monster’s health as a solution, but observing a monster and determining whether it’s weak or angry has always been part of the series’ true charm. Damage values show players when an attack is effective or not, while leaving the essence of observing a monster’s condition untouched. We didn’t make this change just because players from outside of Japan had this opinion, but because we felt there would be players who’d be coming into the series for the first time and would also feel the same way. 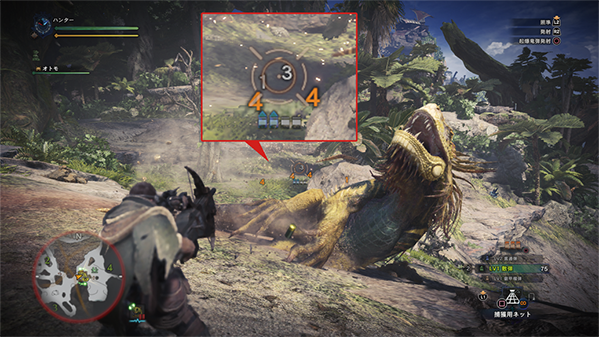 So, it was done for the enjoyment of all first-time players around the world.
We’ve always picked up new players with each iteration of the series, but we understood that globally we would have so many more new players coming into the series with World.
Sales have greatly surpassed 10 million units, but regionally, where is the game selling the most?
The game is of course selling well in every region, but it’s doing especially well in North America. We’ve also maintained our sales numbers for Japan, which is a great result for us. We’ve been saying this since development, but we’ve wanted to welcome players coming to Monster Hunter for the first time, while still satisfying our current domestic audience, so we’re relieved that the game is being well received in both markets.

Your team’s efforts came to fruition, and you achieved Capcom’s first ever 10-million-selling title. Following that with Iceborne, could you tell us what kind of game it is?
Iceborne is what was known as the “G/Ultimate” version previously. We designed the G/Ultimate versions as deeper dives into each game’s content, so we would take feedback from players after the release of the base game, then add new features on top of that. We were determined to internationalize the in-game system, so we replaced the previous “G” moniker with “Master Rank”. In addition, we added new mechanics like the Clutch Claw, a new locale called the Hoarfrost Reach, a new headquarters, a two-player difficulty level, and a slew of other new features to give players an enjoyable experience that’s true to the Monster Hunter series.
Iceborne was released as an expansion to Monster Hunter: World. Could you tell us how this came into being?
Until now we’ve always released the G/Ultimate versions in a physical format, however thanks to wider-reaching network infrastructure the percentage of home consoles connected to the net has greatly increased and digital purchases have become more common. Even with World, we had a large portion of digital sales globally. To meet the needs of this growing audience, we decided to offer Iceborne as downloadable content (DLC) that only includes the new features. Of course, for players who haven’t purchased the base game yet, we also have a physical disc version that includes both World and Iceborne.
What aspects of the game do you particularly want players to enjoy?
As far as action goes, definitely the Clutch Claw. It can be used with all weapons, and it’s an easy mechanic to understand. You can fire the Clutch Claw from the slinger attached to your character’s arm, and from there you can grab onto a monster, then wound it to make it more susceptible to attacks, or you can force the monster to change directions and set off traps or bash itself into walls. In terms of narrative, players can enjoy a story that picks up after the events of World and includes appearances from fan-favorite monsters from previous games in the series. In World, we didn’t have a lot of returning monsters, and since many players were asking for them, we delivered as many as we could.
Were there any other major improvements from the base game?
We improved on the action as well as the usability of the player’s headquarters. We also previously only had difficulty levels for one player or four players, but we realized that there were many people who were playing in pairs, with their partners for example, so we added a difficulty level for two players. Since they were only playing with each other, we wanted to ensure that the needs of those players were met as well.
How were you able to collect that kind of information?
We started with searching for player feedback on social media, and also got opinions from people within Capcom—not just from development staff, but from other sections of the company as well. Additionally, we received reports from our overseas branches on feedback from players globally, and our in-house localization team also gathered opinions that were posted online.
You’ve been taking an active role in many overseas events. What do you personally feel is the difference between Japanese fans and fans from other parts of the world?
There’ve been times where we do interviews one after another so I’m not able to leave the interview room, but when I talk to the local media and players, I’m able to get a sense of their preferences and experiences. Everyone’s interests are different. My personal impression is that the overseas media are very direct with their questions, which is an interesting difference from the Japanese media. I also feel that no matter where I go, the number of people who know about Monster Hunter has grown. It’s grown especially popular in Asia. It may be surprising, but in countries such as China, Malaysia, Korea, and Taiwan, etc., Monster Hunter’s popularity is really on the rise.

Taking the Time to Develop New Talent
After 15 Years, a Continued Focus on the Future

Game development nowadays has grown greatly in scope. How many developers are working on Iceborne?
It depends on the phase, but we have over 300 people working on the game. Capcom’s game development is split up into two large groups, and the Iceborne team is part of Consumer Games Development Division 2, which has around 700 people, so you can understand the scope of World’s team from that.
What is the reasoning behind having that many people?
Instead of one person managing the project by themselves, each section has their own leader managing things. We’re also creating an environment where we can develop our staff. Each year, our company welcomes over 100 new university graduates, so the leaders of each section help with their training. 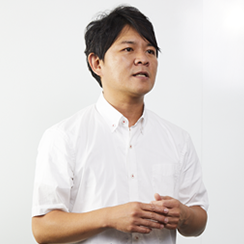 One hundred people is a big number!
We’re focusing on the future and bolstering our development capabilities. Of course, it takes time to nurture skills, but each person is a vital asset for the future of Capcom that we’re dedicated to training for years to come.
Is this large-scale development trending in the entire industry?
Yes, I believe so. Technological advances have allowed us a greater range of presentation compared to the past, so it’s a natural progression. Working closely with our Technology R&D Department is our company’s strength, and we’re actively integrating new technology.
Globally, it’s said that the video game industry has grown to 40 trillion yen. With the news of GAFA* entering the market, it looks like we’re entering an era of very fierce competition. Do you have the confidence that Capcom can survive?
*GAFA: A general acronym representing the 4 largest IT companies: Google, Amazon, Facebook, Apple.
I believe Capcom can do it. Iteration is very important in technological development, so if you’re five years late, it will take ten years to catch up. At Capcom, we develop our own game engine, which I think allows us to keep up to date with the latest technology.
You’ve been working on this series as a producer for a very long time now. Do you have a sense of accomplishment for what you’ve made the series into?
This series is something we’ve developed as a team, so I can’t take full credit. I can’t make or sell anything by myself. Luckily, we have a young generation of new recruits that mention having played the previous Monster Hunter games as kids. They know so much about this series, and they might end up creating an entirely new kind of Monster Hunter. The series is now 15 years old, but I believe it’s a game that will continue to evolve.
Looking back at the past 15 years, is there anything that has left an impression on you? Perhaps how Monster Hunter Freedom Unite became an explosive hit?
Yes, Freedom Unite as well as World. On the domestic stage, Freedom Unite really changed the series, in terms of the uptick in the series’ popularity and buzz, and the expansion of the player base. If you ask Japanese players which title left the biggest impression on them, many will say it was Freedom Unite. On the global stage, it was World that changed everything.
Where do you want to take Monster Hunter from here?
Compared to Capcom’s other major IPs, Monster Hunter is still a relatively young series. I don’t presume that everyone in the world knows about World or Iceborne. Even in Japan we’ll have a new generation of players. Since I started my involvement with the series, I’ve wanted to take Monster Hunter beyond games, and make it prevail globally. For the last 15 years we’ve been working hard, but we still haven’t reached our goal. From events to movies and more, we’re going to keep pushing the brand even further. 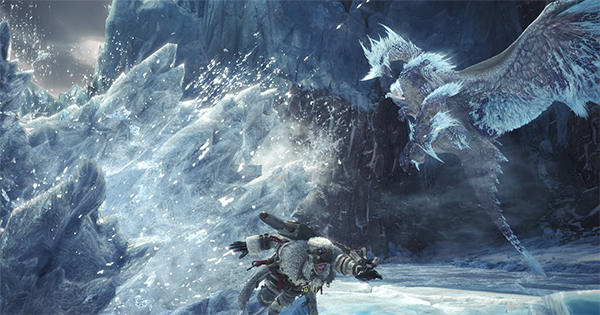 Could you give us a few parting words about the future?
Iceborne has been built with World as its foundation so that players can enjoy a deeper dive into its world. We also have several updates planned to keep everyone playing even longer. We’ll keep thinking of how best to meet our players’ expectations while introducing the series to newcomers around the world. Happy hunting! 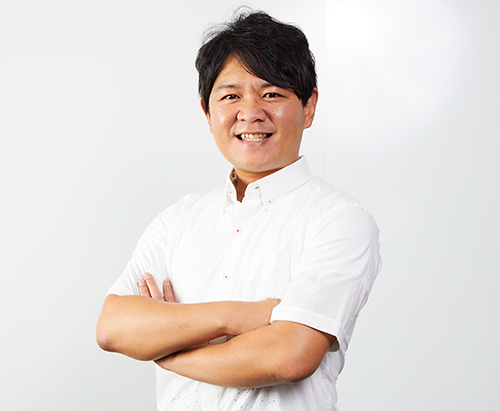